Natalie Milor, Assistant Curator for Acquisitions at the Scottish Screen Archive, writes about her experience on the most recent Scottish Museums Federation Pop-up at the Glasgow Women’s Library.

On the 23rd of July, my day as a twice monthly volunteer at the Glasgow Women’s Library started off with a warm welcome and the offer of a cup of tea – their Twitter handle is @gwlkettle after all! However, something different from usual was planned – the Scottish Museums Federation’s monthly Pop-Up event.

Wendy Turner, the Library’s museum curator, started the event by sharing the history of the Library. She explained about the improvements that were being made to the building, accompanied by the noises of drilling and hammering next door! This work will result in a new exhibition and learning space being opened to the public, as well as a brand new collections store for the museum and archive collections.

Next, we were given a condensed version of the Library’s ‘Glasgow East End Women’s Heritage Walk’.  Travelling through over 160 years of history (and on foot roughly half a mile!), we learned about the lives, achievements and struggles of women from the local area. The tour started at Bridgeton Cross, with an explanation of women’s contributions to Chartism.

We then visited the site where the old Singer Sewing Machine Factory once stood on James Street, as well as Templeton’s Carpet factory and commemorative gate.

We learned about the history of the Glasgow Green’s Victorian clothes drying poles and were introduced to the work of Elspeth King, champion of Glasgow’s social history and People’s Palace museum curator between 1974 and 1991.

We also passed the memorial slab outside of the Winter Gardens which was dedicated to the museum’s rodent-hunting cat, Sister Smudge (who, as per the right of any Glasgow Council employee, was a full member of the GMB union!).

Later, we returned to the Women’s Library to conclude the Pop-Up by viewing a display of items from the museum collection, such as: a Moonwalk bra, a Roller Derby flag and helmet, a brooch in the Suffragette colours and an anti-Suffragette clock. The Library has a large and varied collection of both museum and archival material which covers a range of historic and current issues affecting women. 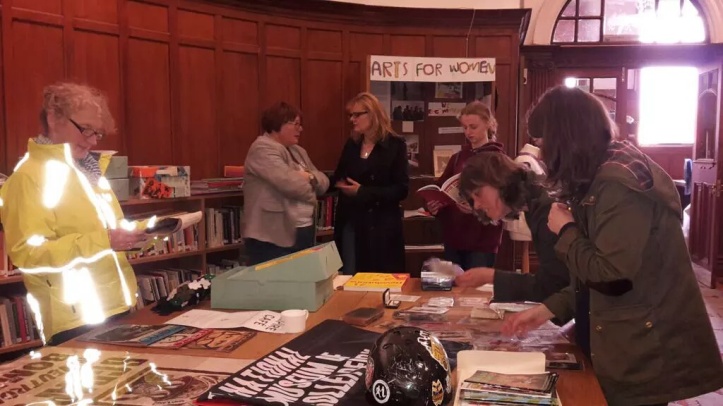 Understandably, the main focus of the visit was the historical tour and museum collection. However, with a team of nearly 100 staff and volunteers, Glasgow Women’s Library is also a lending library, learning hub and centre for community engagement. Above all, it is a place where the empowerment of women is a core value. As a volunteer, it’s a great place learn, meet new people and put the @gwlkettle to good use!